San Diego’s Mayor, Jerry Sanders, yesterday made an announcement that he’s reversing his position on gay marriage, and supporting it. He said his daughter is gay and he can’t maintain his anti-gay-marriage position.
That’s good, that he changed positions, and I support that. I think it’s a ridiculous position, and have never once heard a reasonable argument for denying gay couples the franchise of marriage. I think it’s a contract between two consenting adults and no one should be able to tell them what they can or cannot agree to, period. I think it’s a good change for moral reasons. But, so typical of Republicans, he made the change when it was someone in his own family who would be affected by his stance. Not because people in other families would be hurt, of course, but his own kid. His tearful press conference made me kind of annoyed. It looked to me like he was fishing for news coverage of something that common sense should have made him do a long long time ago.
I’m still waiting, by the way, for anyone to offer any reason whatsoever as to why gay marriage should be an issue of government responsibility. Seriously, I’ve never once seen a reason. Also, I’ve never seen any proofs for:
Gay marriage hurting heterosexual marriage
Gay marriage failing more than heterosexual marriage
Gay marriage causing more abuse than heterosexual marriage (though this is the only one i’ve even heard a peep of a rumor of possible actual research into
Gay marriage negatively affecting children more than heterosexual marriage
and so on and so on and so forth. So, in the manner of Babyfight, FUCK YOU you fucking “social conservatives”. Give me a fucking reason you prick. You have none. You’re basing social policy on NOT LIKING SOMETHING, something that has nothing at all to do with you, and you fucking suck donkey testes. 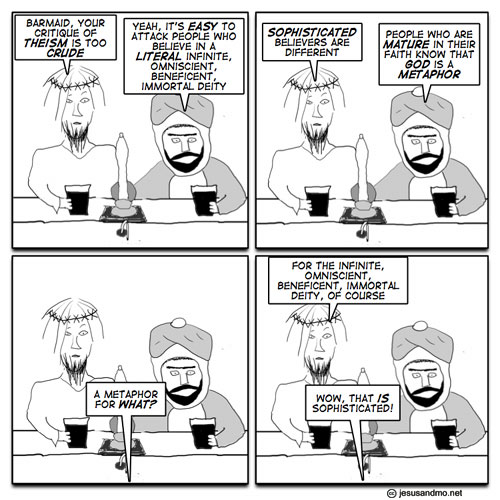 This strip is hilarious, by the way.

I was searching for something totally unrelated, and i noticed the phrase “the pope ain’t no monkey!” and it got me thinking, and then my brain kind of garthed out and i ended up on some totally random pathway thinking about chimps and whatnot, and remembered what i was doing but not why, and somehow ended up with this:

Irregardlessly, i think it’s a good idea to continue to keep the evangelicals suspcious of catholics and jews, which they do anyways because they’re crazy-assed idiot religions tell them to, for the purpose of diluting their mindless borg-powers. i bet if you sold bumperstickers that say “the pope ain’t tellin me how to pray!!!!1!” with like a picture of a .45 on em, you’d be a millionaire.

Or something like. I don’t ever want to miss a chance to make fun of religion.

the bible is funny as shit:

23:1 He that is wounded in the stones, or hath his privy member cut off, shall not enter into the congregation of the LORD.

Ahah! baby, i love what you do to my privy member! I’m sure ancient moabites said that. The Skeptic’s Annotated Bible is kickass, I’m surprised I don’t remember seeing it already. Of course, I’m old and my memory is going. What?